At the end of 2013, Marion from "Foundations Revealed" was looking for little hands to try some old corset patents.   I don't know why but I answered "pick me ! pick me !" I was given the 1855 Peterson's Stays and my article was published in February 2014. Now that time has past, I'm here to share it with you too.

This is the first time I have made something I won’t be wearing in the coming weeks for reenactment and it IS very strange to me but it has been a good adventure in my short corsetry life. This corset is my eleventh one and the fourth without commercial pattern, so I think I can say: quite a challenge!
The pattern comes from Peterson’s Magazine, a middle- and upper-class Victorian women's home life magazine. This one, dated January 1855 and written by Emily H. May, proposed to have "a well-fitted corset made by every housewife or active woman who needs to move". 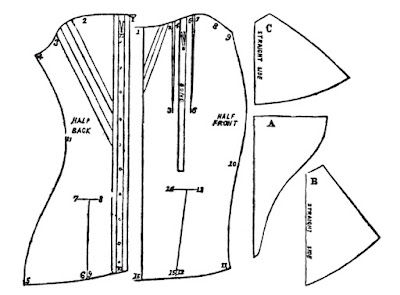 Here is the complete article.

I needed to read it several times because of my poor non-English speaking brain, but in the end, I understood that it’s a long corset, with no central opening but a wooden busk as on the 1800/1840’s corsets and a back-lacing closure. You can see there are very few boning channels drawn, just enough to keep the back straight between the bust gores and at the center front. Hips and bosom gores are wide, rounded and of a curving shape, moving towards the 1860’s shorter form.
In brief, I would say it’s transitional between 40’s and 60’s and surely a comfortable corset.

Before anything else, I enlarged the pattern a little bit. This was both in order to be able to scotch-tape it and have a 3D vision of the shape with the inserted gores, and to be sure that B = hip gores and C = back gores.

It also allowed me to check the gores scale compared to the rest of the pattern, because at first sight they did not seem to fit and yet, except for bust gores, they do. How wonderful optical illusion is!


On this model, we can see a very accentuated shape quite like the later corsets and it is hard to visualize the "long" side of the corset.

To enlarge the pattern, I used my printer and % scale. Before scotch-taping, I checked that the center back (CB) and center front (CF) had the same measurement on paper. So, basing myself on both paper and measuring of the actual extent of CF, I got a 255% enlargement coefficient.

Unlike many articles I have read on FR, I do not have Photoshop or other similar software, but I can handle a .jpg file in Windows Paint: File> Layout> Expand a xx%> ok. I then print in PDF, which allows me to print only the desired pages of the document (because there’s a lot of full blank pages).

Note: For taking measurements, after having tried to understand why it is necessary to "deduce 2 at the waist as an allowance for the clothes" (this can be understood) but why to add "4 inches for the clothes" in the length, I decided to do as I usually do and not to follow Peterson’s instructions.
My measurements:
Since it is possible for me to enlarge the front and back pieces based on the waist measurement, the other alterations will be made with gores.
I chose to have a lacing gap  of 7.5cm (3'') and a waist reduction of 6cm (2.4'').

My calculations for my 93cm waist measurement:

Now I must divide 14.5cm between back and front pieces of the pattern. As there are only two parts and they are assembled on their side, I decided to add 7.25cm equally to each part.

For the back, the insertion is easily done once, parallel to CB between the side and the gore (not moving the gore). For the front, insertion is done in the same way: parallel to CF between the side and the gore, but there I did it with three steps of 2.5cm (see picture below). With hindsight I wonder whether I could also not have done it at once.

It's time for the first test on Cunégonde, my dummy! Time for the first bit of stress as well, even if that it’s only paper, because you get to see rather quickly whether everything fits or not.
When I pin the CB keeping my gap closed, the CF is not in its place. I then I temporarily added the shaded part, as there is a seam in this place, but it will still be able to adjust if necessary.

The gores are not yet open so it’s a bit tight, but we can already say that:

For the gores, I insert my pattern pieces (fabric or paper) behind my mock-up and redraw adjustments directly over :


The verdict of the first fitting was that I realized I was not totally convinced the bust gores were the right shape or size. I must say it’s difficult to make final adjustments without somebody's assistance on this kind of gore, so I decided to ask a friend of mine for help. But actually, my mistake was only due to my laziness: I had simply sewn gores on just half of my mock-up (so only two out of four bust gores...).

Having sewn the two other bust gores, it turned out they were perfect. On the other hand, an adjustment was needed on back gores, which were too big and badly placed. Unfortunately, the corset was already edge-to-edge, because I had been losing weight since I had started working on it. I decided I must amend my pattern again, so I removed on all the seams 0.5cm and 1cm on the mid back (what amounts to 5cm).

On the following pictures you can see:

I'm always surprised, even taken aback, when I see these before / after pictures - and that's why I like them, because usually my pattern no longer has much to do with the original.
Well, it's time to sew now...

I cut the corset in a single layer and assembled wrong side to wrong side, then lap seamed.

For the hip and back gores, I also used a lapped seam as the 'T' drawn on the pattern shows that the seam allowance of the gore slash is sufficient. On the other hand, for the bust gores, we can take only 5mm seam allowance so I have assembled them as normal.

Regarding the boning, I made a big change from the instructions in Peterson's Magazine. We’re asked to "drill a hole through the stay and the bone, about an inch and a half from the top and bottom of each bone, and fasten them in with silk, by bringing the needle through the hole to the right side, and passing it over the top of the bone"; thus it’s possible to remove the bones to clean the corset but it creates mini buttonholes that I find to be visually ungainly.

For my corset, I chose to cut the fabric on the straight grainline which will serve as bone casings on the wrong side (sewn wrong side to wrong side with 5mm of seam allowance). All the bones are German Plastic Bones 7mm wide, except the two CF diagonal bones which are 11mm wide.

For the CF busk, I didn’t have what’s required in the explanations, so again I made a large channel lapped seamed on the front side, this time on the right side of fabric. The busk is a sturdy wide steel boning of 20mm found at Sewcurvy.com.

To sum up, I followed those steps to build the corset:


And then, I can begin to floss. This has been the first time I have attempted full flossing. Since I am running out of time to finish the corset, I will put pictures up as soon as I have finished!

Once again, Foundations Revealed is a true Bible:

Flossing: Xs and Crossovers
Flossing, part 2: Vs and Chevrons

Tadaaaaa! Well, the front part which has not been flossed yet looks either very dark or empty... but it is rather not that bad, in my view, since I intended this corset to provide a silhouette of the right shape in order to wear the correct costume.


Impressions / what I learned

When Marion proposed this challenge on FB, my first reaction when I saw the pattern was "Doesn't seem so complicated..." ...and then there was confronting the reading... feeling disheartened... and sewing... But in the end, yes - this corset is (almost) as simple as it seems at first sight: gores fit almost on their own and as we saw, the other two pieces fit also very easily.

On the other hand, I realize that I took some liberties with this pattern in its realization. The more difficult part actually is not making the corset, but writing this first article.
As to the corset itself, it is very comfortable with so few bones; I feel maintained while not being completely stuck inside.

The drawback of this comfort is that famous unsightly crease on the side; if you want it to disappear you can add a vertical bone beside the side seam (no need to rely on a spiral bone in the side seam, I think).

If I had to do it again, I would make the gores differently, or more properly. I'd take more time, since this is only my third gored corset and I'm still struggling with these techniques. I would have especially wanted to manage the bust gores differently so that the inside would be clean, because now I'll have to cover them through with bias.

Here, again, I should have read this FR article beforehand.

Another point to review would be putting metal boning, at least in the CB (I didn’t have a long enough one at home), and / or moving the back diagonals bones which in this case are not doing their job; that is to remain flatly pressed against the top of the corset back. (I made the mistake of moving to the left / down instead of right / up, which seemed more logical.)

Last but not least, a piece of warning, even though it won't surprise anyone: never run this kind of project if you're on a diet!